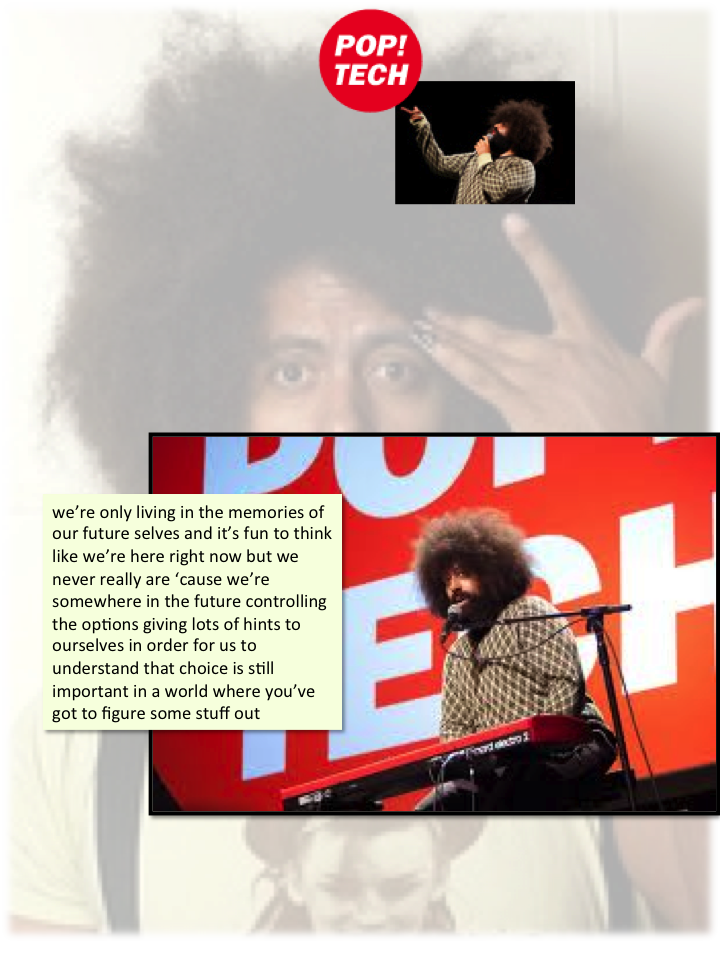 Reggie Watts, PopTech 2011. Consider the many problems that a linear time concept entails (Zeno’s famous paradoxes). Consider Plato’s main issue: in a world of becoming, where is being? With that in mind, the following.

A friend of mine once told me a story of his childhood. It was when he was about eight years old, growing up in what may be called a deeply religious social environment. The pressure that such an upbringing puts on a boy can be immense, and at one time it became too much for my friend at this early age. It was on a Sunday, in the church, as he was walking into it, and all the way through it, to the lectern where the pastor was to deliver his words of admonishment. Pushed forth by his father and gazed at by the community, with their stern looks that spoke of a thorough contempt for innocence, the walk to front row must have felt like a condemnation, a rite of passage to a world of sorrow. It was during this walk that my friend experienced something that would forever change his outlook on life. As if taken by the hand by an older brother, he felt lifted above himself, to look down at the community with mature eyes, feeling a reassuring awareness, as if someone said to him: don’t worry, it’s okay – this anxious faith is not for you, and you cannot be made subject to it. My friend described it to me as being helped at a time when you simply cannot do it alone. The despair that precedes, the immense relief, the thankfulness that ensues – but it wasn’t thankfulness toward someone or something; it was that he, for a moment, became bigger, stronger, wiser, so he could cope all by himself.

As my friend experienced this, he did not understand it. It may have been the most decisive moment in his life, but at that time he took it for granted and moved on, even forgetting what had happened, as he didn’t know what had. It was only much later that he would understand. At age twenty or so, having freed himself from his religious fellowship, having travelled the world with nothing but a carefree smile as luggage, having learnt to rely on providence, he paid a visit to his old church – perhaps nostalgically, perhaps to close a chapter of his life. As he walked into it, and all the way through it, to the lectern where the pastor would deliver his words of admonishment, vividly remembering the severity and anxiousness that he used to experience there, he didn’t feel sorry for himself to have been subjected to it all – he felt the reassuring awareness of a free mind and kind heart, and with that he felt that he could cope with all the pressures that had weighed down on him as a child, remembering that, at that very moment, he did.